Where to start? And how?

Let’s suppose (for today) that this all started when the parents of John Dorsey met and a little baby John Dorsey was born. Then let’s say we flash-forward some years (hoping I get this story straight) to when the aforementioned Mr. Dorsey was completing a residency at the Osage Arts Center in Belle, MO. Perhaps then came a cold and dark night in the winter of 2016 as a poetry reading was held at the aforementioned Osage Arts Center and brought together from Kansas City and St. Louis (and other locales) a group of writers known to the aforementioned Mr. Dorsey. Some of these writers may have had names like: Brett Underwood, Shawn Pavey, Stefene Russell, Jeanette Powers, Brandon Whitehead, Jim McGowin, Jason Ryberg, & Jameson Bayles. Literary kinships were kindled and the writers went their wanton way, back to their cloistered cities to plot and scheme.

And what foul and flowing plots did froth over from their fiery minds.

Not to be outdone, the St. Louis schemers upped the literary ante by programming and producing 3 high-caliber events of poetic repute from which we are all attempting to recover. I have no idea how I got invited along but I didn’t want to waste the opportunity so, for the weekend, I composed a lengthy protest poem entitled America Hates You, America which I split into 3 parts to be read across the 3 events. I hope to put up a link to AHYA in the near future.

Then came Leyla King (8th grade!!!) and finally the aforementioned John Dorsey brought the house down.

Interspersed between the poems, the collective musicians from Poetry Scores played and Holy Whitman, mother of Ginsberg! were they awesome. They translate poetry into other media, essentially turning poems into songs and sometimes scoring longer poems. I had a smile on my face from start to finish. Definitely check them out.

An odd place to find oneself after such a sequence of happenings. A very odd place indeed.

Thank you to all the folks in St. Louis for putting everything together. I’m humbled to have been involved and inspired to make better words because of it. Can’t wait to have you all (and more) back to Kansas City. 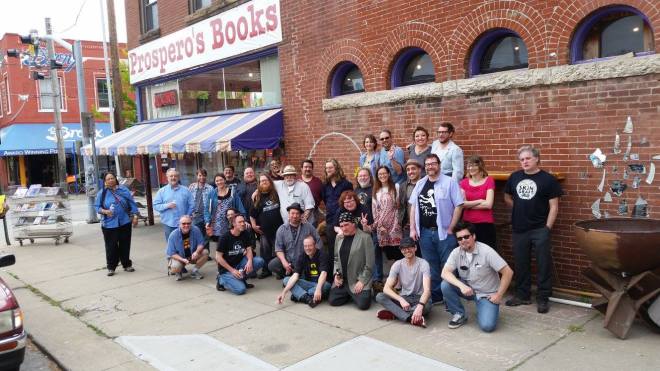 And this ain’t even everyone who participated! It was a feat of poetic engineering and I am humbled to have been invited along for the ride.

Some of the writers from this weekend’s poetry throwdown
Loading Comments...