The missus made the daily:

We were singing
Rudolph the Red-Nosed Reindeer
at church
instead of
Amazing Grace
and something
didn’t seem
quite right;
like
there was no verve,
no gumption,
no gratification
for caroling
to the heavens.
It didn’t seem
like the right
little ritual
for the time.

And this was,
at bottom,
the very reason
I wanted
to sing
my memoirs
at a Christmas Eve
extravaganza.

I needed
to sing
these truths:
that we must love each other,
that happiness isn’t constant,
that the brain needs melody,
and that life is like a gingerbread house:
quite messy
and prone to collapse
just when you think
you’ve got it all
put together nicely
(but pretty sweet
from start to finish).

The people
in my memoir song
sound different
than they do
in real life.

When my mother sings,
“Would you like
to be
a little elf?”
she sounds like Emmy Lou Harris
and I recall my mother,
wide-eyed and wrinkle-free,
with hair halfway down her back;
when her voice drifts down
to sing,
“Or would you like
to be
buried under snow?”
you must recall
that’s how
I’ve written
her parts
of the song.

When my family comes
to my song’s premiere
no one asks
what the song is for.
They only ask
why they all
sound different
from how they sound
in real life.

After the premiere,
we all go out
to eat fried rice
and steamed veggies.

We wait hours
for supper
to arrive.
We don’t talk
about much,
but we do hum
along to some
jolly Christmas tunes
saturating
the air
around us.

Then One Foggy Christmas Eve

When I was a child,
my father told me
I had a miscreant’s mouth
and a ne’er do well’s nose.

In the nights then,
my fingers bled feathers
and my brothers
bit my ears.

My sisters‬ and I
were ne’er to start,
yet we shared‬ the same father
so cooked from his fire.

Though she‬ was not‪ much‪
for mother‪-teaching‪ us,
so I left the family to grow
a ne’er boy of my own…

‪I aged and fell away
and imitated a‪ mother‪
despite the feathers
that fell from me.‬

‪I stared up
at my sisters,
box of boxes in hand;
ne’er such expression‪s.‬

‪At last, they‪ pointed‪ back
to our shared pasts‬
and ne’er once asked
for explanations.

I dreamed of kicking bears in their blood-stained teeth as they chased me up to the top of tall trees.

And I dreamed of fighting children armed with aluminum bats and covering their visages with riot gear masks.

Then I dreamed I saw a gargantuan arm in the distance and I knew I was no longer dreaming.

I walked towards the giant appendage and saw another arm waving to me from afar.

I knew I wasn’t imagining things.

Then I blinked and saw arms stretching from treetop to treetop.

I saw hands grasping at me and yelling words in a signed language.

I witnessed arms springing forth from my arms and I knew that they couldn’t be from any another arms but mine.

I knew the new arms were attached to my old arms, my own weak and weary arms.

I wanted to shake my own hands, pat myself upon my own back, climb up the trees like a monkey spider, but as I tried to leave the ground I felt something pull against my leg and I toppled.

With a great effort I picked myself up and looked down to see arms had sprouted from my legs and were carrying me over the edge of a ragged cliff.

I knew that I was dying then, dying in my own arms.

The arms propelling me over the cliff were the arms that I never knew I had and that I had recovered in my dreaming.

Yet I knew I wasn’t in my dreaming.

I knew that I was falling.

I could feel all my arms flailing, hopelessly treading air.

I felt my new arms break and splinter from my body as I hit the ground below.

There were so many arms upon the dirt that I grabbed one and lifted it up to my eyes.

In the web of its hand, between thumb and forefingers were bloody teeth and a dark, hungry mouth, like a bear’s.

I thought about kicking the arm in its bloody teeth, but felt that wouldn’t help, so I thought instead to hold tight as the arm lifted me in the air like a bundle of helium balloons.

The world turned again and I looked toward the sky.

In the passing clouds, I saw my mother’s face.

She had fangs and a smile and around her head danced cherubs dressed in riot gear.

“I tried to tell you about dreams,” cloud-mother said.

“And sometimes,” she sighed, “sometimes you forget.

On a day, chilly and wet, much like today… 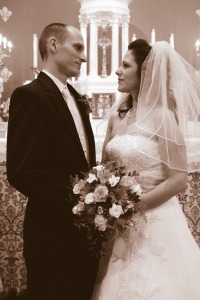 Building Preutopia with you has been a grand adventure.

Life is good and fast. Make those moments count, people.

still young enough to feel
faint echoes of that communal hollow
from whence you sprung not so long ago
kicking, screaming, wondering in fever-pitched frustration
why this now?

i only listen;
answer with tender brutality

yes, it will happen to me
to your mother
to your sister

yes, other people will live
in our house
after we are gone

yes, even batman will die

i know, but even batman will die

for tonight, you don’t believe me

The Bat Grave, or Talking with My Son About Living

Proud of my cousin, Mark, for knocking this out.

Forensic evidence gathered from attempt made on 1/11/2015:

Disguises, forged documentation, Australian accents (in-character for a good 4 minutes before cracking under our interrogations).

“It’s for the bank.” seems like a pretty legitimate reason given by a bank, no?

Breeding the next generation of social engineers

Last night’s episode of The Goldbergs (a loving sendup of 80s suburban American) exposed our children to New Kids on the Block – and by extension “Weird” Al (which I’ll get to). If you didn’t see the episode, the two brothers find an old VHS tape of their older sister on which she’d recorded her mad love for NKOTB. The boys planned to use that tape to tease her relentlessly, but couldn’t help themselves from falling in love with the New Kids, resulting in the boys recording themselves lip-syncing Hangin’ Tough. The video gets out and yadda yadda yadda. Good episode (most are). Now one of the many, many awesome things about our kids is that when something grabs their interests they dig right into it – and after the show it was, Was that a real song? Who were NKOTB? Did you like them, Daddy? BOOM!

We are in the Brainbow.

On a purple couch, suffused in the prismatic light of the Brainbow, sit JORDAN, JOEY, DONNIE, DANNY and JON, THE NEW KIDS ON THE BLOCK, frozen in time around1989. They aren’t doing the New Kids’ dance. They are looking right at us, unmoving, unblinking, seemingly on the verge of tears.

DID I LIKE THEM? SHIT. HOW DO I ANSWER THIS? NO I DIDN’T LIKE THEM. I WANTED N.W.A. TO GIVE ‘EM SUMPIN’ TO DANCE TO. I WANTED ICE T TO BREAK OUT HIS DRILL ON ‘EM. I WANTED THE GETO BOYS TO SHOW ‘EM THE MIND OF A LUNATIC!

WE’VE BEEN TOGETHER FOR A LONG TIME, BABY.

DO YOU HAVE TO LEAVE?

NKOTB
(Standing up, hands over hearts)

No, kids, I can’t say I liked them – coolness codes of late 80s/early 90s forever prevent my saying those words…but I can tell you that I knew all the lyrics to their songs. Then my family teased me and we spent 30 mins youtubing NKOTB videos and doing the New Kids’ dance. I think I’m going to make some shirts that read “Donny is my home boy.”

Soon it was time to brush teeth and put on pjs. And while that was going on I mentioned “Weird” Al’s parody of “The Right Stuff”, which prompted: Who is “Weird” Al?

I’d failed as a parent. Our kids are pop music aficionados. They have incredibly nuanced and wacky senses of humor. They write their own parodies of Christmas carols about pooping! How had this taken so long? We quickly remedied this by foregoing standard bedtime routines in favor of 30 minutes of “Weird” Al videos which truly blew their minds and induced fits of giggles all around. It was awesome. They especially liked the Polka Face medley.

Finally, it was lights out and as the day faded away I caught our daughter humming lightly into her pillow: Oh, oh, oh, oh, oh-oh – Hangin’ Tough. Golden moments of parenting.

Then came morning and our son wakes up, rubs his eyes and asks, Can I watch some “Weird” Al videos? That was awesome, too.

This post is dedicated to my brother, M. The P family’s biggest “Weird” Al fan and only admitted NKOTB fan. (You didn’t hear that from me.)

The White Stuff (In the Middle of an Oreo)
Jason Preu
Loading Comments...